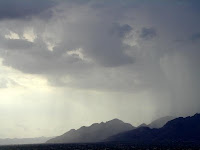 Reference: Forecasters predict good monsoon season, Bangkok Post, April 15, 2010
For about two years now the global warming people have been warning us that our carbon dioxide emissions will weaken and delay the monsoon in South Asia with devastating results that were to include drought, crop failure, and and hunger (Climate change to delay monsoon in South Asia, Bangkok Post, March 20, 2009). Yet, the 2009 monsoon came right on time not at all delayed or weakened and whatever devastation it may have caused came as floods and not as drought (Flash floods from heavy monsoon rains, Bangkok Post, July 21, 2009); and the 2010 monsoon is expected to do the same (Forecasters predict good monsoon season, Bangkok Post, April 15, 2010). Those who make policy decisions based on the long term forecasts of the IPCC that cannot be checked against data may wish to consider that all - every one - of their shorter term forecasts that can be checked against ensuing data have been proven false.
Cha-am Jamal
Thailand
Posted by Chaamjamal at 10:00 PM