Reference: The Sepoy Mutiny of 1857
What we know today as "India" is a British invention and historians who ignore this detail and try to trace the history of India beyond its creation risk reading too much into isolated and unconnected events as Indian history. Such is the case with the Sepoy Mutiny of 1857. It started as a labor dispute. Indians serving as armed soldiers for the East India Company resorted to violence when they were denied certain pension and promotion benefits that they had demanded and things came to a head when the initial mutineers were dealt with very harshly and when a rumor was spread that the Enfield rifle bullets that the soldiers were required to bite into contained objectionable substances. In the melee that ensued, outsiders such as the heads of princely states and the senile and irrelevant heir to the Moghul empire tried to use the mutiny for their own selfish advantage. All of this came to nought precisely because there was no single coordinated war against British rule but a cacophony of selfhish and localized actions within the context of British rule. Much too much has been made of these events. It was not India's first war of independence and it did not lead to partition in 1947 nor to the rise of Isamlic extremism, the Taliban, and Al-Qaeda.
Cha-am Jamal
Thailand
Posted by Chaamjamal at 6:46 AM No comments: Links to this post

On the matter of assisted suicide in Switzerland, October 2008
Darwinian thought paints a scary picture of who we really are. Suppose that there were once more rational human able to choose between life and death and between reproduction and celibacy using nothing but pure cold logic. After many generations we would find that nature had weeded these people out of the population simply because the mathematics of natural selection favors the unlimited desire to cling to life and to mate. Natural selection does not promote rational thought. It selectively breeds crazies like us and we are who we are because of that. Nature selectively breeds insanity until the insane take over and then they get to make the rules that discriminate between sanity and insanity.
Cha-am Jamal
Thailand
Posted by Chaamjamal at 11:13 AM No comments: Links to this post

Reference: The chance to bring about an Asian Century, Bangkok Post, October 15, 2008
By the time the dust settles in the global financial crisis, we may find that Western supremacy has weakened and that the door has opened for China to take the lead in the global economy and to usher in the much anticipated Asian Century.
Cha-am Jamal
Thailand
Posted by Chaamjamal at 5:26 AM No comments: Links to this post 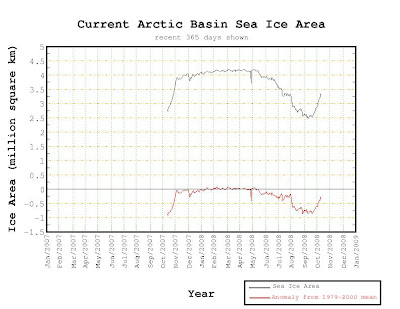 Reference: Arctic to be ice free due to man made global warming
For over a year now global warmists have expressed a great deal of alarm with respect to their projection that the Arctic will soon be ice free because of man made global warming. Nature, however, appears to be marching to a different drummer. The data show that the summer melt of Arctic ice in 2008 was less extensive than the melt in 2007. The 2008 melt bottomed out earler than usual and the ice extent in the Arctic basin is now growing at a very rapid rate. Over the last month it has grown by 800,000 sq km. The IPCC has taken note and has revised its projection of an ice free Arctic first from 2008 to 2013 and then again from 2013 to 2030. The way things are going it may be revised again to the year 2100. They played the same game with their projection of sea level rise changing their proejctions to anything from 6 meters to 50 centimeters and the time frame from 2030 to 2100. And yet, they appear to retain a great deal of credibility with the media.
Cha-am Jamal
Thailand
Posted by Chaamjamal at 3:15 AM No comments: Links to this post

Reference: Taiji's annual secret dolphin genocide, Bangkok Post, October 15, 2008
The word 'genocide' is used to describe an attempt to eliminate a human tribe or ethnic group by carrying out mass murder of the targeted individuals. Killing mammals for their meat - whether pigs, cattle, sheep, whales, or dolphins - cannot be described as genocide because these creatures are not human beings and also because the purpose of the kill is not to eliminate human beings but to sustain them with food. Individuals who find it shocking to see mammals being killed with knives and their blood being spilled should stay away from slaughterhhouses and they should stay away from Taiji during the annual dolphin hunt.
Cha-am Jamal
Thailand
Posted by Chaamjamal at 7:51 PM No comments: Links to this post

Reference: West is accused of shameless blackmail, Bangkok Post, October 4, 2008
The government of Kenya accused envoys from donor countries of shameless blackmail and gross condescension because they blamed the head of the election commission there for mishandling the election held last December (West is accused of shameless blackmail, Bangkok Post, October 4, 2008). Yet, it is the not only the right but the duty of donor countries to ensure that their aid is not misused by the government of the people for whom the aid is intended. Aid recipient governments find themselves in this fix because they are corrupt and dysfunctional. If they wish to regain their sense of sovereignty they may do so by improving governance and balancing the budget without the use of foreign aid. Until then they must be held accountable by the donors. If it is colonialism then it is voluntary colonialism and the onus still lies wth the government of Kenya and not with the donors.
Cha-am Jamal
Thailand
Posted by Chaamjamal at 12:05 AM No comments: Links to this post

Reference: Sarah Palin's alternative universe, Sunday Forum, October 5, 2008
I think that Bob Herbert has been irrationally mean spirited in his condemnation of Sarah Palin, in effect declaring her a clueless bimbo from the hintenaland (Sarah Palin's alternative universe, Sunday Forum, October 5, 2008). His intimation that Sarah Palin has not offered a fix for the miliary crisis in Afghanistan, the financial crisis on Wall Street, and the unemployment crisis on Main Street omits the obvious observation that no one else has either. He is right that Palin likely did get the context wrong when she quoted Reagan, but what does that have to do with Afghanistan, Wall Street, or unemployment? Mr Herbert's partisan colors are showing.
Cha-am Jamal
Thailand
Posted by Chaamjamal at 9:38 PM No comments: Links to this post

Reference: Finding it hard to stand, Bangkok Post Mylife Magazine, October 2, 2008
In cases where bicycling has interfered with the erectile function, it has done so by putting excessive and prolonged pressure on the perineum. In men, the perineum is the narrow soft tissue between the scrotum and the anus, and it contains blood vessels and nerves that are necessary for an erection to occur. Contrary to what has been published in MyLife Magazine (Finding it hard to stand, Bangkok Post, October 2, 2008) male cyclists are not forced to sit on their penis, and the higher rate of erectile dysfunction among cyclists is not explained in terms of the effects of of sitting on one's penis.
Cha-am Jamal
Thailand
Posted by Chaamjamal at 1:58 AM No comments: Links to this post