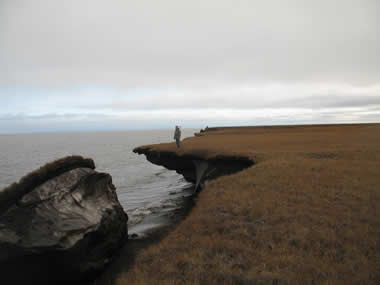 Reference: Alaska coasts melting, Bangkok Post, April 8, 2009
When permafrost melts, the soil above it subsides and along the coast this process causes erosion and the Beaufort coast of Alaska has been eroding in this manner for thousands of years. The rate of erosion depends of the concentration of ice in the permafrost. The more ice you have the faster it will erode and the ice concentration varies over a large range along the thousand miles or so of this coastline. The finding that a small 40-mile strip of this coast eroded very quickly in 2007 ( Alaska coasts melting, Bangkok Post, April 8, 2009) does not in itself lead to any conclusions of a general nature for the data are limited both in space and in time. Erosion in this part of Alaska is a natural process. To make generalizations from a miniscule portion of this coast over a brief time span will surely lead to erroneos conclusions. Back in 2005, the warmists had raised a similar alarm that man made global warming was melting the vast peat bogs of Siberia and that the melt would release enough methane and carbon dioxide to bring about climate change Armageddon by virtue of a non linear process gone berserk. It did not happen. We have not heard much about Siberia since then. The global warmists are a moving target busy ignoring data that don't serve their purpose, digging for those that do, and duping the media with sensational press releases. Clearly, they are not engaged in objective scientific inquiry.
Cha-am Jamal
Thailand
Posted by Chaamjamal at 4:11 AM