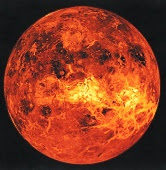 Venus is similar in size to earth but the comparison ends there. It is a lot closer to the sun and it has no magnetic field. The atmosphere there is 96% carbon dioxide with clouds of sulfuric acid. It is a planet of volcanoes that may have had some liquid water once but was never like earth. Yet, the implication of the article ( Venus inferno due to greenhouse effect, Bangkok Post, December 3, 2007) is that Venus represents earth's fate if we don't reduce greenhouse gas emissions from fossil fuels. It is yet another desperate attempt by the global warming people to scare the rest of us into going along with their agenda. Desperation of this magnitude, instead, should serve to alert us to the level of fraud that is being perpetrated upon us.

Cha-am Jamal
Thailand
Posted by Chaamjamal at 3:00 AM